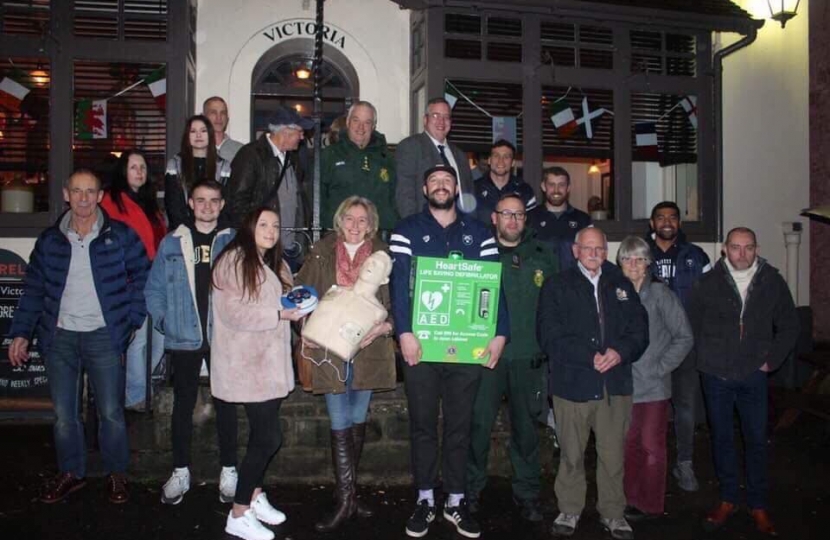 A public use, Defibrillator (AED) was unveiled last week at the Victoria public house, in Chock Lane Westbury-on-Trym on. It is hoped that this will help form part of a wider network of community accessible defibrillators across the City as campaigners hope to improve on survival rates from ‘cardiac episodes.’

The money for the defibrilator was raised from a donations campaign lead by a grieving mother whose son died unexpectedly, and is the second one she has raised funds for. The first, installed in Clevedon, has already saved a man’s life over the Christmas period.

Bristol Bears players, Aly Muldowney, Joe Joyce, and Sam Jeffries, came along to the event and were happy to endorse the unveiling. As part of the drive to promote community led CPR the Bristol Bears coach, Pat Lam, recently got the Great Western Air Ambulance to train all of his players in CPR. They are, as far as we are aware, the first rugby club to do this.

Community responder manager Kevin Dickens and paramedic Steve Cooper were only too happy to attend on behalf of South Western Ambulance Service to show how important community defibs are. The organisation as a whole is keen for more of the public to learn CPR, which works in tandem with the use of a defib, in the case of a cardiac arrest emergency.

It was great to be invited along. The simple fact is that CPR saves lives. All too often people die in Bristol who would survive if only more people knew, and were confident in using, CPR. Every minute counts in a Cardiac episode - the more people that are trained the higher the likelihood that someone near by can help when a problem arrises.

I hope that people will take advantage of training opportunities across the City.