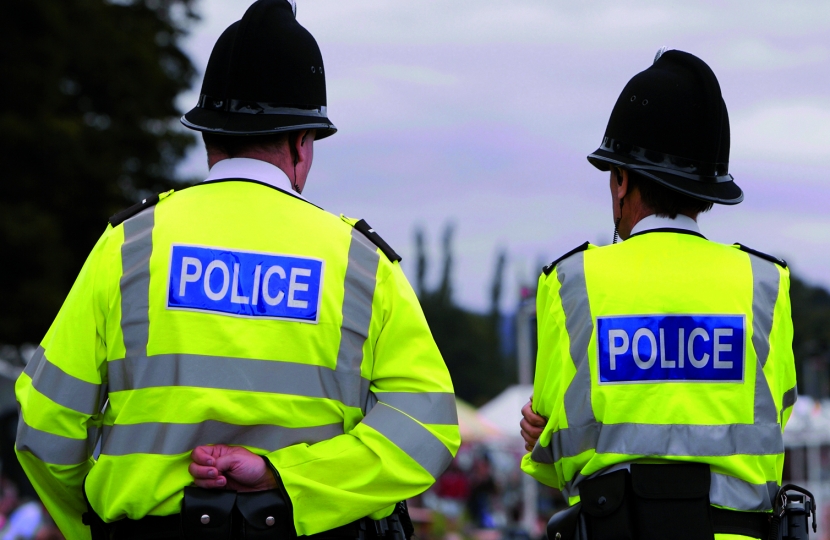 I warmly welcome the announcement by the Government that they intend to release the purse strings and fund the recruitment of 20,000 additional police officers. I want us to be safe and feel safe in our communities and a lot of that comes down to a physical policing presence – a presence that at the moment is stretched thin.

This extra money though also presents an opportunity to re-balance the unfairness’s in the police funding formula. The way that Government grants are awarded is based on a complicated calculation that takes into account population and crime figures – the end result of which means that per head of population we have the second lowest support grant in the country. Attempts by successive administrations to reset the formula, to make it ‘fairer’, have come to naught as it always creates winners, losers and a political storm.

However if the budget is going to grow then surely now is the time to look again. Every Constabulary could receive more money but those poorest funding could receive that little bit more. There would be no loser’s anywhere but we would certainly benefit here.

I have written to the Home Secretary – Priti Patel MP – to make the case for this re-balancing.

My full letter is below:

I start by sending my congratulations on your reappointment to Cabinet and promotion to one of the Great Offices of State.

The reason for this communication is to make the case for more generous funding of our local police force.  As you will be aware, the Prime Minister has promised to recruit 20,000 extra police officers over the next three years (starting next month) and that such an ambitious project will no doubt present a number of logistical problems over cost and timescales if we are to meet this target. However, this necessary move has also served to demonstrate that, thanks to the efforts to reduce the national deficit since 2010, there is now more scope to invest in our public services.

In spite of modest annual increases in the main police grant, the Council Tax precept (with ability of PCCs to raise an additional 1% from taxpayers) demand on these resources is increasing exponentially (especially when coupled with population growth) and steadily outstripping budgets.

Avon & Somerset Constabulary, which is acknowledged by HMICFRS as ‘outstanding’ in its ability to manage its resources, have produced an informative report “The Tipping Point” identifying the various challenges confronting the force at present.  These can be summarised here as changes in policing itself, more complex forms of criminality emerging, to be dealt with by 655 fewer officers, and after achieving £65m in savings since 2010.  At the time of writing this Service is tasked with finding a further £17m in efficiencies if it is to bridge a projected funding gap by 2021/22.

I agree with this report’s analysis and stark conclusion that it will be extremely difficult to maintain the kind of community style policing that the public want and deserve if there is a continued rigid adherence to the current financial modelling.  Accordingly, I would urge you to take advantage of the next ‘post-austerity’ Spending Review to secure a much more generous – fair funding settlement – for the UK’s territorial police forces in general, and our local constabulary in particular.

I would also add the the Avon & Somerset Constabulary is in receipt of one of the lowest  Government grants in the Country. As well as recruiting more police I believe that this increased funding presents an opportunity to redress some of the current imbalances in the historic funding formula.

I look forward to receiving your comments or observations in this matter at your earliest convenience.