Invest in Rail to cut congestion 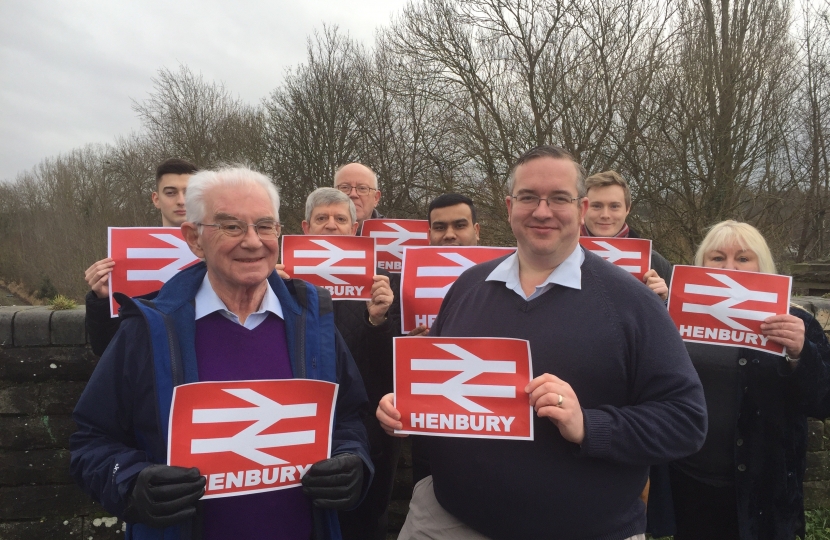 In order to cut congestion in Bristol we need to improve public transport and reduce commuter traffic on our roads.

For too long Bristol has ignored its railway lines. The Mayor may talk about his passion for an Underground but at £4bn it simply isn’t feasible. We need to be doing more to take advantage of the large amount of existing ‘over
ground’ track.

The Henbury Line is due to reopen in 2023 – this is good news but more needs to be done.

I want us to look again at reopening the full Henbury Loop complete with new stations at Horfield and Chittening. If we can connect the primary employment areas of Temple Meads, the Avonmouth Industrial Area and the
manufacturing centres at Filton on the one loop line then it is a game changer in our efforts to tackle congestion.

The Government has already given additional funding to the region to help deliver on our rail ambitions. I want to work with the Regional Mayor, City Council and the Government to take this even further.

Every commuter using rail is one less car using the roads!

So what is happening on Rail right now:-

There is quite a bit happening with rail which is great – but rail improvements seem to take forever – which is less good.

To be honest here we are most worried about phase two as that is the one that deals with the Henbury Line. MetroWest Phase 2 proposes new stations at Ashley Down, North Filton and Henbury, with an additional half hourly service to Yate (and possibly an extension up to Gloucester) connecting into Temple Meads in the City Centre. It is currently moving through the design and engineering phases.

As part of the Henbury Spur programme there was a consultation on whether the station should be at the old station on Station Road or a new location on the Brentry side of the A4018. In the end it was 49% in favour of the old station and 48% in favour of the Brentry base. With things so evenly balanced it became a case of which would be cheaper. Several factors fed into this one including how many bridges the trains have to pass under, the amount of signalling required and also the fact the old station had been sold off by Network Rail in 2011. This resulted in the Brentry location getting selected (even though they need to sort out the problem that the ground gets very wet there).

The development work to date has confirmed the location of Henbury station and Network Rail have developed the outline designs.

The next stage of the project is to develop the documentation to submit the planning application. As the station is located in a Flood Zone, the Combined Authority is liaising with the Environment Agency, South Gloucestershire Council and the housing developer, Persimmon, to confirm the requirements for managing the flood risk and flood plain compensation. This involves reviewing the Persimmon plans against our station plans and may require some design rework. This needs to be undertaken prior to submission of the planning application to ensure that the application is of the highest quality.

The intention was to submit the planning application in the first quarter of 2021. We are working with the consultant team to address the flooding issues and submit as soon as possible. The priority will be to submit an application that meets the Environment Agency’s requirements.

Following the planning submission, Network Rail will procure a contractor for the design work. We are working towards a late 2023 opening date depending on resolution of the flooding issues and the ongoing impact of the pandemic. This has slipped slightly from the original schedule.

In terms of pedestrian and cycling access, a new cycling and walking link is proposed directly from Wyck Beck Road along the Persimmon access route to the station (constructed by Persimmon), with links onwards to the proposed housing development.

In addition, as part of the options assessment we are looking at options for a pedestrian and cycle footbridge that would shorten the distance between the A4018 and the station. The footbridge is currently outside the project scope and would require additional funding but could be considered in future.

So to summarise the station and line will open, but a little later than planned, and once it is then let's go whole hog and complete the full Henbury Loop!

So that’s a very quick update on the Henbury Line – if however, you are a complete rail geek like me then below is what else is happening regarding rail in the Bristol area:

MetroWest Phase 1, which includes the Portishead line and enhanced services on the Severn Beach and Bristol Bath lines, is still being designed. The West of England Combined Authority (WECA) commissioned a study looking in detail at the engineering and signalling requirements for the project. It highlighted a number of challenges which took a while to investigate fully, such as the works required to the track along the Avon Gorge to enable the required line speed, and the signal work required where the Portishead spur joins the main line. The result of this is that the costs for the Portishead element of the MetroWest Phase One went through the roof, although the other two elements (a better service on the Severn Beach Line and improvements to the Bath to Bristol Line) were fine.

The results of this study obviously impacted on the overall scheme as it essentially left it with a multi-million-pound shortfall. In the end the Department for Transport stepped in and agreed to bridge the gap so this too is pressing forward.

Separately to the core MetroWest phases, the Authority has been developing a brief for a ‘MetroWest Enhancements’ study, to investigate further potential enhancements such as improved frequencies, new route opportunities and the potential for new stations. As part of this the Joint Transport Strategy includes provision for a new Station at Horfield serving the communities of North Bristol and a recently announced study to reopen the old St Anne’s Station in Brislington.